Chocolate provides comfort, makes you happy and is our lifeline in cold weather, restlessness or when we are not well. Its basic ingredient, cocoa, contains an extraordinary number of healthy nutrients. However, cocoa only develops its full health – promoting potential in a high percentage and raw form. 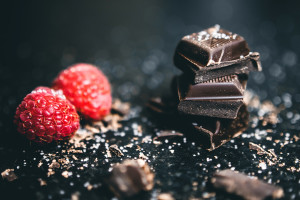 People apparently need a lot of comfort. They eat large amounts of cocoa every year. Now the question rises: How healthy is that? Why do we need chocolate so much and what should we pay attention to when snacking? High quality chocolate is currently celebrated as a noble and trendy gourmet product. There are reasons for that, as cocoa is packed with nutritious and valuable ingredients. It is considered a superstar among superfoods. According to estimates, raw cocoa contains around 300 different active substances that have a positive effect on our entire organism – on our cardiovascular system as well as on the brain, bones and immune system. And what real chocolate fans have long well known is now confirmed by doctors and nutritionists: Chocolate makes you happy:)

The great scientific interest in chocolate applies to a very special group of substances called polyphenols. These secondary plant substances have strong antioxidant properties. “Already 50 grams of dark chocolate contains twice as much polyphenols as a glass of red wine and just as much as a cup of long drawn green tea”, the molecular medicine specialists Richard Beliveau and Denis Gingras estimate the amount in their bestselling book: “Foods to Fight Cancer”. The most important polyphenols in cocoa are the so-called proanthocyanidins, colourless bitter substances. They make up between 12 – 48% of the weight of cocoa beans. Their share is only surpassed by that in cinnamon. According to the two cancer researchers, dark chocolate in particular is a highly effective antioxidant. Studies have shown that proanthocyanidins protect against cardiovascular diseases. They lower blood pressure and keep blood vessels healthy by counteracting atherosclerosis and preventing varicose veins and painful hemorrhoids. They are said to have anti-inflammatory properties and even prevent cancer. Proanthocyanidins fight diseases and health problems caused by free radicals and oxidative stress, like a natural anti-aging agent. Beliveau and Gingras recommend 25 grams of chocolate with a cocoa content of 70 percent for daily consumption.

Important to know: The effect is cancelled if chocolate is enjoyed with milk or contains milk. The polyphenols are then absorbed differently by the body and their effects are blocked. Only raw cocoa has all of these wonderful properties. If the brown beans are heated too much during further processing, valuable substances will be lost. Some chocolate manufacturers have adjusted to this and therefore offer bars that contain raw cocoa.

Powerpack with many minerals

In earlier centuries, chocolate was used both as a medicinal and as a stimulant. Its strengthening and invigorating effects were highly valued. The many minerals in the brown bean are striking: magnesium, calcium, potassium, vitamin E, protein, iron, zinc, copper and omega-6 fatty acids. For every 100 grams of cocoa, there are almost 500 milligrams of magnesium. Hardly any other food product reaches this value. Magnesium is important for cell metabolism and helps with fatigue, exhaustion and lack of concentration. It also has a muscle-relaxing and antispasmodic effect, which is why women can benefit from it as well as athletic people. In addition to magnesium raw cocoa also provides another important nutrient, namely calcium – minimally more than milk.

Chocolate therapy – Comfort in all situations 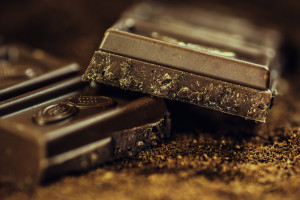 Cocoa contains the mood enhancer serotonin, a neurotransmitter, that is also known as “Happy Hormone”. The mood-enhancing effect of chocolate is less related to the serotonin it contains than to the high carbohydrate content. Because serotonin cannot get into the brain via the bloodstream. However, carbohydrate – rich food stimulates serotonin formation in the brain through a series of intermediate steps. Interestingly, cocoa also contains tryptophan, an essential amino acid that is converted to serotonin in the body. After the soybean, raw cocoa is the richest vegetable source of tryptophan. In addition, there are about 1-2% caffeine and theobromine. The alkaloid theobromine is a structurally related stimulant that is similar in effect to caffeine. But its effects are milder and more permanent and it also brightens the mood. Sensitive people should therefore enjoy chocolate with a very high cocoa content before the afternoon.

The darker the better?

Some love sweet bars and other sweets with a high milk and sugar content. The purists use dark varieties with a high, often raw cocoa content. Both variants contain an adequate portion of fat. Cocoa beans themselves consist of a lot of fat: So called cocoa butter makes up about 50%. These include approximately 35% stearic acid and approximately 25% palmitic acid – both saturated fatty acids. Added to this is around 35% oleic acid, a simply unsaturated fatty acid. It is known from olive oil and is said to have a positive effect on our cardiovascular system. Remarkably, stearic acid in the body is partly converted to oleic acid. According to the current state of science, cocoa butter is not unhealthy but a classic source of energy: “Dark chocolate is therefore a food that could be called neutral in terms of its effects on cholesterol levels”, say the doctors Beliveau and Gingras.

This is how chocolate is made

The preparation of the whitish cocoa beans begins with a short phase of fermentation. The cotyledons lose their bitter taste, they turn brown and the first aromatic substances are formed. Later the beans are dried and roasted, broken and ground – the dark brown, viscous raw cocoa mass is created. The mass can be processed directly into chocolate or it is pressed to extract the fats it contains, the cocoa butter. When coaching, the cocoa mass is heated so that unpleasant flavours evaporate. In addition, the individual cocoa particles are enclosed with cocoa butter by fine grinding. Dark chocolate is made from cocoa mass, sugar and cocoa butter. The process steps and ingredient lists differ depending on the variety and manufacturer.

How to recognise Fairtrade – Chocolate

Whether chocolate block, chocolate Santa or chocolate bar: there are certifications on the packaging of many products that promise ethically correct chocolate enjoyment! The emblems of UTZ, Fair-trade and Rainforest Alliance are most common. All three certificates are based on standards such as the protection of international human labor rights, the prohibition of abusive child labor, the improvement of agricultural cultivation practices and environmental protection measures for sustainable cocoa cultivation. Farmers also get slightly higher prices than in the free global economy. However, only Fairtrade pays a guaranteed minimum price and a fixed social bonus per ton. None of the three mentioned certificates are perfect but definitely better than no certification. The majority of cocoa farmers state that their living and working conditions have improved by participating in the respective programs. At Organic & Quality Foods we are only selling Fairtrade  chocolate. Fancy a healthy mood enhancer today? Please order here: