Why is grass fed meat better for you than grain fed? 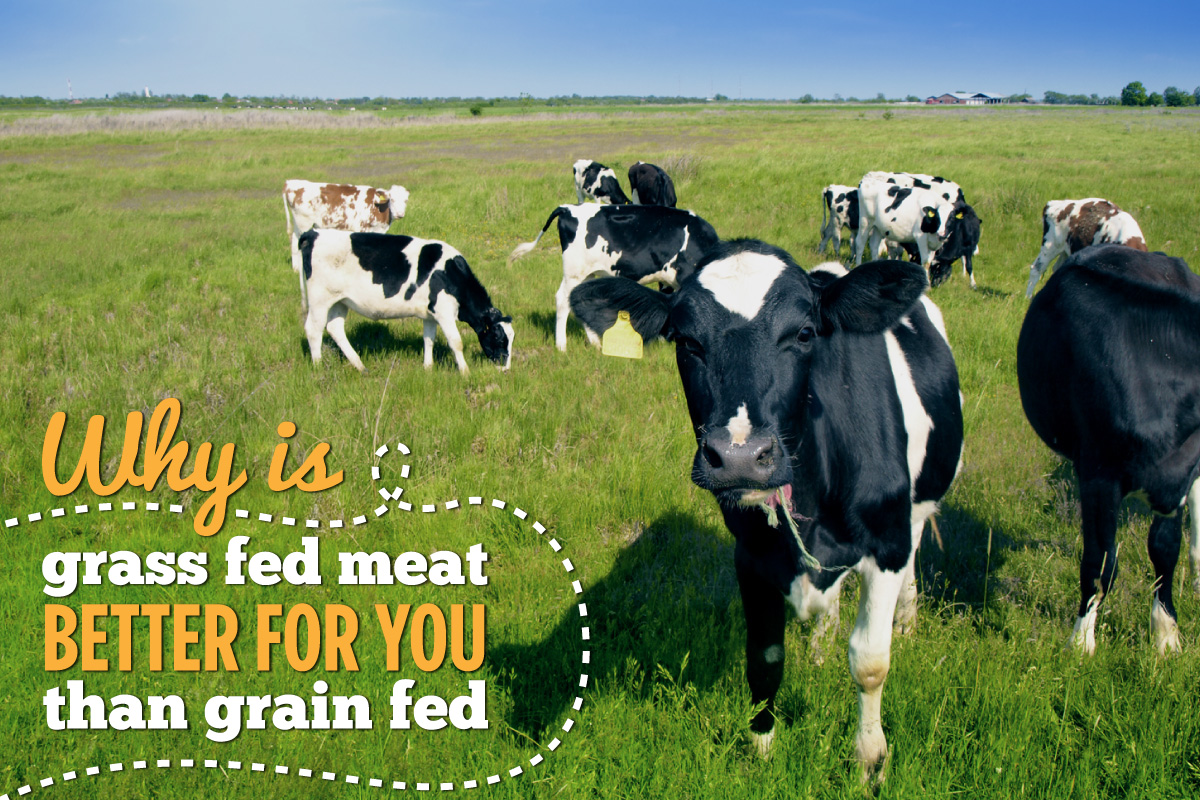 Take yourself back to about ten years ago. Remember how the buzzword for quality meat was “grain fed”? Well, that has dramatically changed, now we’re on a wave of really thinking about what goes into our food. Now the rage is all about grass fed meat. But many of us don’t understand the important differences between the two.

Here we will explore what is meant by the two categories and explain why grass fed meat is the better option.

In Australia, we are pretty lucky with the availability of pasture fed meat. Around 70 per cent of Australian beef and lamb is grass fed, ensuring that we always have access to it. But, if we get down to the nitty-gritty details, what really is the difference between grass and grain fed meat?

Grain fed meat is described as animals that are fed grain instead of grass. They are kept in feedlots and are fed corn, soy and other grains. This mixture is sometimes described as a “growth spurt” formula. This is because cows that are fed grain can grow to slaughter weight up to a year faster than a cow that has been grass fed. This in turn, delivers a product that is faster and thus cheaper to produce. Another important issue to recognise with grain fed meat is that it has a lot of marbling. This, of course, makes meat more tender which makes the label of grain fed meat much more appealing to some people. However, that marbling is fat, fat which changes the nutritional composition of the meat and making it, in a number of ways less nutritious.

Grass fed meat is described as animals that have foraged on grass without being treated with either hormones or antibiotics. Because of this different diet, most studies show that grass fed meat is lower in calories and contains more healthy fats such as omega-3, higher levels of antioxidants and up to seven times more beta-carotene.

You’ll notice a few differences between grass and grain fed meat. Specifically the price. Grass-fed meat will be up to about 30% more expensive than grain-fed. This is because of the added time and cost it takes to rare the animals. The second most noticeable difference is the texture of the meat. Because grass-fed will inevitably have less marbling, it will also be less tender. However, don’t let this turn you off grass fed meat as it is amazing for slow cooking and other types of cooking.

Amongst all the buzzwords you have encountered, you may also have come across the terms “grass finished” and “grain finished”. This simply refers to whether the animal was finished being reared to ideal weight with grass or grain feed. Why would you switch the type of feed?  Because of the additional time it takes to rear a fully grass fed animal. To overcome this issue, some farmers grow their cattle until they are about a year old and then send them off to a feedlot for around 90 days. This not only speeds up the weight gain adding an extra 50 kilos during their time at the feedlot, but it also adds to the marbling of the meat.

Grass finished, on the other hand, refers to animals that have been bred from start to finish on grass, without any time spent in a feedlot.

As you can see, there are many different ways that animals can be reared, and it is easy for meat to be misrepresented. However, the Cattle Council of Australia does provide a certification process. It states that to receive a “Certified Pasturefed” label, cattle “must have had open access to graze pasture their entire life, have not been confined for the purposes of intensive feeding for production, be fully traceable for their entire life via the National Livestock Identification System and be guaranteed to eat well, based on Meat Standards Australia.”

So overall choosing grass fed meat is not only better for your health it is more ethical and sustainable as well.  It may cost a little more, but when it comes to choosing products that are better for us, and better for the environment, how much is that worth?