Some people suggest that drinking raw goat milk is dangerous to your health. While there is some risk associated with drinking unpasteurised milk they are minimal compared with the benefits. Before we look more closely at the benefits, let’s understand unpasteurised milk. This is milk that hasn’t undergone the sterilisation treatment that usually involves heating the milk to kill the bacteria within it. As a result of pasteurisation, some of the nutrient content of the milk is also affected by the heat and is considerably lowered. 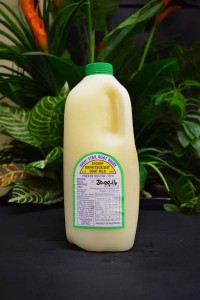 Both cow and goat milk have the same fat content. Nevertheless, the fat globules in goat milk are smaller in size than those of cow milk making it easier to digest and synthesize them. Raw unpasteurised goat milk, therefore, has a softer curd than cow milk, improving its synthesis by the stomach enzymes.

Cow milk has over 20 different allergens as compared to goat milk, which has fewer allergens that cause dairy sensitivity. Aside from that unpasteurised milk boosts one’s immune system thereby improving one’s tolerance to allergens. More so, goat milk has less lactose than cow milk, meaning that there is reduced sensitivity in people that are lactose intolerant.

Beneficial to the skin

While pasteurised dairy has been shown to have negative effects on one’s skin, raw milk is very different. Raw unpasteurised goat milk actually improves the skin health. The high vitamin and nutrient content moisturizes the skin, reduces inflammation, and is a remedy for skin conditions such as acne and psoriasis, among other benefits.

The cholesterol content in cow’s milk is considerably higher than that of goat’s milk. The lower cholesterol content means that you have a reduced risk of obesity, hypertension, diabetes, and cardiovascular diseases among other related conditions from drinking goat milk.

The mentioned benefits point to the fact that drinking raw unpasteurised goat milk does more for you health wise than all the available alternatives such as pasteurised dairy and cow milk. The high nutritional content works well to improve your health, boost immunity, reduce the risk of many diseases, and also the risk of nutrient deficiencies.